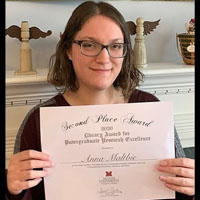 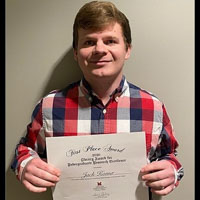 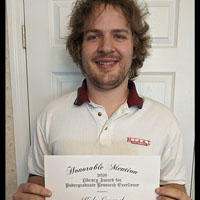 The committee also awarded an honorable mention for the most innovative use of library resources in a research project to Computer Science major Jacob Sandy and his project team members Kyle Laycock, Andrew Nieto, and Christian D’Amico. Their project “The Application of Machine Learning to Digitized Postcards as Artifacts” was sponsored by Philippe J. Giabbanelli, and Alia Levar Wegner was the librarian providing support for the project.

The LAURE recognizes and celebrates undergraduate students who demonstrate excellence in using library resources while conducting research and class projects. A partnership between the University Libraries and the Dean of Libraries’ Student Advisory Council, the award offers up to a $750 prize to winning essayists who describe how they used library resources during their research process.

Each LAURE winner’s essay and research projects are uploaded to the University Libraries’ Scholarly Commons, an open-access digital repository for research conducted by Miami University students, faculty, and staff.