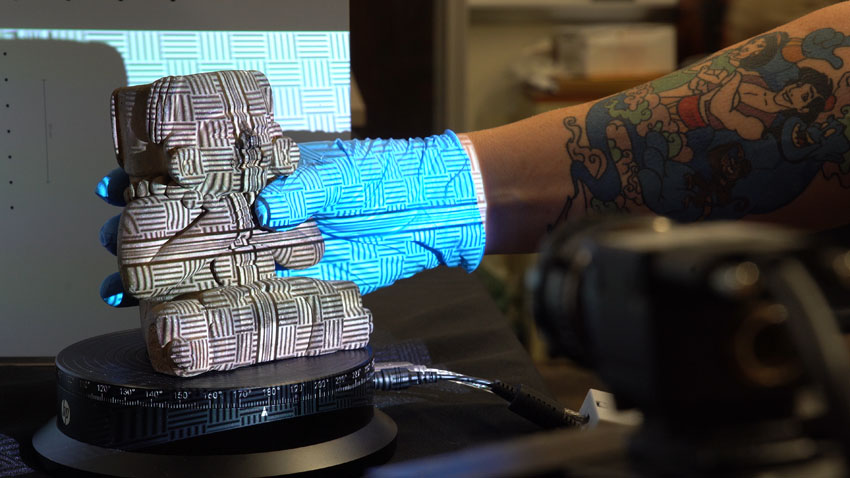 In Miami University anthropology classrooms, students routinely handle, manipulate, and even experiment with priceless historic artifacts — some of which the university doesn’t own.

It’s possible through a collaboration between the department and the University Libraries, whose 3D scanning and printing capabilities can create copies of artifacts from the anthropology department’s collections and from other organizations around the world.

“Tactile engagement is really a valuable learning tool that makes instruction much richer,” said Faith Walker ‘21, a Miami junior with dual majors in Anthropology and Art and Architecture History. Walker works with Jeb Card, an assistant teaching professor, on the anthropology department’s efforts to scan and print objects to enhance instruction and research.

Scanning an object in three dimensions creates a digital model, which the Libraries can then recreate in plastic, resin, or other materials using a 3D printer. These copies give students the opportunity to directly handle and study artifacts without fear of damaging a piece of history. And since many copies can be made inexpensively, lessons can be built with the assumption that all students have the ability to inspect the artifact up-close at the same time.

The collaboration between the anthropology department and the Libraries began in 2013, when Card began exploring the ways 3D printing could enhance the student experience in his classroom instruction. With funds made available from the student technology fee, he purchased a 3D scanner to create digital models of artifacts in the anthropology department’s collections. To reproduce them physically, he needed a 3D printer. Access to the technology was scarce at the time: only a handful of departments at Miami had machines, and those printers were usually dedicated to specific faculty members’ research interests or courses.

John Williams, a senior library technician who developed and continues to run the Libraries’ 3D printing services, puts it simply: “the Libraries got into 3D printing because not all disciplines had easy access to it. That’s the beauty of having this technology at the Libraries: it’s available to everyone.”

When Card got wind the Libraries were building 3D printing capacity, he reached out to Williams. In fact, Card’s artifacts comprised the first project ever completed by Williams for the Libraries’ printing services.

The department has also seen the other benefits of these techniques first-hand. During a renovation of Upham Hall, an intruder broke into a glass display case and stole an Aztec clay bowl dating to 1200-1600 C.E. Fortunately, Card had already scanned this particular object, and Williams created a full-color printed version. While a 3D-printed copy cannot replace the true artifact, the digital and physical facsimiles give scholars a far greater sense of the artifact than a written description or photograph. 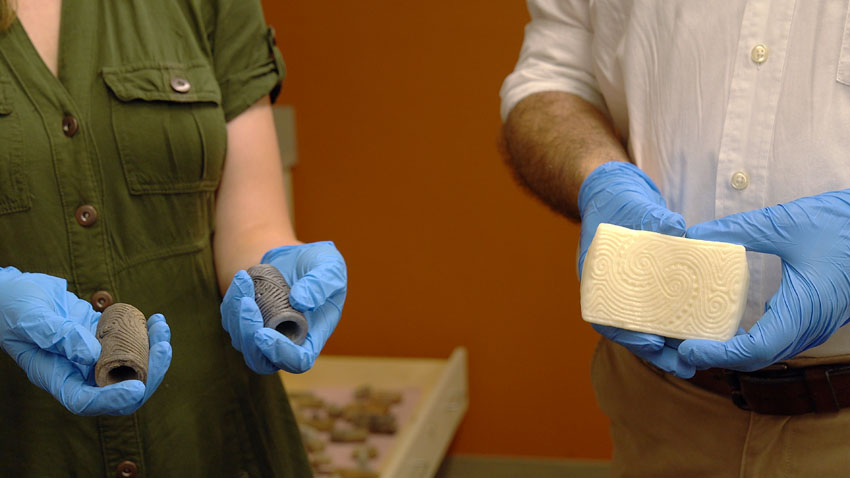 With a digital copy of an artifact available, scholars can broaden their research questions to include exploration beyond what is typically possible with historic artifacts.

When Sarah Loomis ‘16 studied cylinder stamps — small round cylinders engraved with figures or writing — in Card’s Summer Scholars Program, she wanted to investigate possible uses for the objects.

“They look like they’re for rolling something, right?” Card said. “We were wondering if they were used on paper, textile, wood, or perhaps ceramic, so we did an experiment. We wanted to apply ink to them, but of course, we don’t want to ink an original, thousand-year-old object. So we scanned all of our cylinder stamps, printed them, and then actually inked and tested them on a number of different materials. It ended up that they were probably used for making imprints on people — a sort of temporary tattoo.”

But the possibilities go further than recreating the object. With a digital model, researchers can manipulate, scale, or even transform artifacts. Card pulled out another 3D-printed piece: this time, a rectangular object with the cylinder stamp’s design engraved on one flat side.

“This block is that cylinder stamp, unrolled and flattened. Once you have a digital object, you can manipulate it and modify it. We can use this for stamping the design, or put it up in an online gallery where the design is much more intelligible than in a rolled-up form,” said Card.

The technology also lets institutions share access to their collections. These online platforms allow anyone to download and recreate historical pieces from around the world, serving as both an open-access repository and a virtual archive. With access to 3D printing services through the Libraries, Card enhances his instruction with artifacts the department doesn’t own.

“Most of our collection is Meso-American; we don’t have that many Egyptian pieces. But, since there are many scans of Egyptian artifacts available online, we can print those and add them to classroom instruction,” said Walker.

“It’s also really great for researchers,” Walker elaborated. “If you have an object that you’re not quite sure about its origins or significance, you can go online and look for objects of a similar type. There might be more research or information that would shed light on the object you have.” 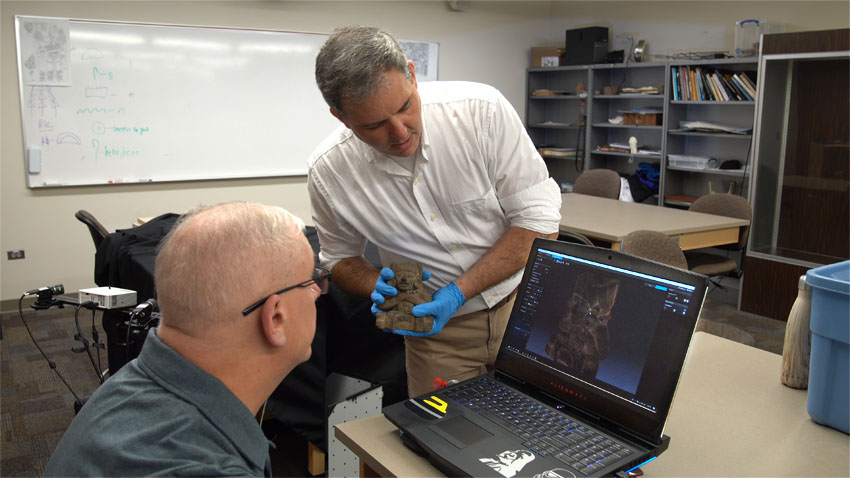 Card’s use of 3D scanning and printing progressed significantly over the years, to the point where his lab now includes its own 3D printer. However, he still frequently uses the Libraries’ services.

One challenge of 3D printing is the time it takes to complete a print. Depending on the printer and the size and detail of the object, it could take an entire day to reproduce an artifact. Under Williams’ direction, the Libraries have invested in printers with greater capacity and speed.

“The Libraries can really increase Dr. Card’s throughput, especially with larger production runs. He can come to me with an object he needs 30 copies of for a class next week and I can knock them out in a day or two,” explained Williams.

In Card’s lab, Williams provides support to student interns, helping to troubleshoot printing or scanning issues and consulting on projects.

“I’ll often have students come up to me in the library and say ‘I work in Dr. Card’s lab — could you show me that thing again?’ and I’m like, ‘sure, let’s do it.’ I help train them, troubleshoot problems, and give them tips and tricks for printing,” said Williams.

Scanning and printing objects is a complicated process, and features like reflectivity, hollow interiors, and overhangs present challenges to reproduction. The technologies used to produce scans vary. Most recently, Card and the Hefner Museum have followed Williams’ lead in adopting structured light scanning instead of laser-based scanning.

“He’ll come to me with different objects that he has trouble scanning or are giving him trouble, or sometimes he’ll need more detail and finer resolution on a particular artifact,” said Williams.

“We’re able to problem solve and collaboratively come together to make it happen.”